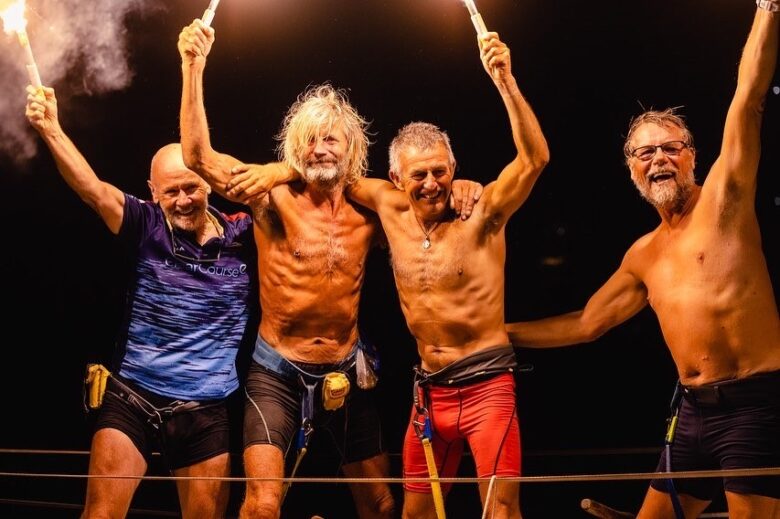 11th May 2022
General News, Marketing, TrainingComments Off on Our Atlantic Journey

It hardly seems like it really happened, but it actually did. On the 21st January 2022 we crossed the finishing line in a total time of 40 days, 12 hours and 33 minutes.

We amazed ourselves that we achieved the crossing in this time, in spite of a Marlin strike (more later) as it was a full 10 days faster than we thought we would do. I think we were spurred on by the fantastic support we were receiving from back home in Shropshire from both individuals and companies such as ETS

The journey across the ocean was everything we had hoped it would be. Whilst the challenge is a massive test of you physically (and it pushed us beyond where we thought we could go), it was an equal challenge of our mental strength. There were times when out on the water that you just did not want to get back on the oars and row for another two hours where your mind had to overcome this and get your body moving.

One of the most asked questions about our row is ‘What were the waves like’. At the start, there weren’t any!. Once clear of the starting line (the start was a very emotional event as we waved goodbye to our friends and family stood on the harbour wall and realised that this really was the time when all the talking stopped and the action began), the sea became as calm as a lake. We had never experienced the sea when it was like this and it was a great way to start our first couple of days. We rowed well and more importantly none of us were seasick. It also allowed us to settle down to the arduous patter of 2 hours of rowing followed by a break of 2 hours where you had to eat, do odd jobs, go to the toilet and get some sleep.

Our route at this time (and for the first 5 days) was to go due south from La Gomera. This made sure we avoided a massive storm that was heading in from the northwest of the Atlantic. Some crews decided to try and beat the storm with a more aggressive route which resulted in all but one of them suffering some very bad weather indeed causing one of the crews to have their boat overturned and other crews having to go on para anchor which meant they made no progress for a few hours.

The weather did change though and soon we experienced what the Atlantic could throw at us. As we continued south and then finally west towards Antigua, the waves increased massively in size (normal waves were about 2m high but we had wave of 10m on a regular basis come at us). Whilst these types of conditions are much more challenging, if they are in the right direction, you start to learn how to surf your boat down the waves. Our normal speed on the water was between 2.5 – 3.5 knots, if we got a wave to help us, this could increase to 9 knots albeit for just a few seconds.

Rowing the Atlantic is like many jobs you want to do well. You need to apply yourself every time you go out and do something and this became our norm for the next 30 days or so. During these 30 days, we experienced Christmas Day at sea (unfortunately we had no carrots or mince pies for Santa) and the dawning of 2022. On New Year’s eve, we stopped rowing at 23:45 and spent the next 30 minutes together on deck swapping stories and aspirations for the past and new year’s and took in the majestic beauty of the ocean and just how lucky we were to be able to experience this. On 00:15 on the first day of the New Year, we got back to work.

Around 750 miles from home, we were sitting in 10th place in the fleet (which was pretty amazing as we were ahead of full armed forces crews with people half our age, 2 miles behind the Atlantic Nomads and only 8 miles behind 8th place crew the Salty Sappers). Our families had been told by Atlantic Campaigns (who organise the race) to change their flights to earlier ones as we were expected to come into Antigua around the 18th of January (a 38-day crossing!) when we got struck by a Marlin fish. Now during the crossing, we had experienced many flying fish going over the boat and often landing in the boat after hitting one of the crew. Flying fish are relatively small going from the size of a minnow to the size of a small mackerel. A Marlin on the other hand can grow to the size of 2 tonnes in weight and is the fastest fish in the sea. When this particular fish hit us, it made a hole in the bottom of our boat with its spike (like a swordfish spike) about the size of an orange and broke the seam to a second compartment in the boat which meant we were taking on a lot of water. The hit from the Marlin literally stopped the boat in its tracks with the force of the impact.  The boat was not in any danger of sinking due to the great design of them but with two lockers filled with water, we were listing to starboard significantly and needed to do what we could to repair the damage.

Whilst we tried our best to get a complete repair, due to the size and location of the hole, the best we could do was to fabricate a cover over the hole from the inside of the compartment (we used a sandwich box lid for this!) and secure it with a lanyard (rope) around the outside of the boat. This was not a complete seal as water could still seep in, however, it stopped the main flow of water and allowed us to pump as much of the water out of the two compromised lockers themselves and them shove into those lockers a mixture of accumulated rubbish, food we knew we did not like (in the packets still) and blown up fenders to ensure that only the minimum amount of water could be in the lockers. This still meant we had around 100 litres of extra water being carried for the remainder of the journey (the equivalent to another crew member) and had to manage the balance of the boat in some different and innovative ways.

The result of our Marlin strike was that we lost time in both carrying out the repair (and two further attempts at improving the repair) and speed in the water for the next few days.

One thing it did not affect though was our morale and determination to finish the race. We knew the support from Shropshire was behind us and by that time, we had also experienced the absolutely brilliant event of the coming together of hundreds of people in Wellington town square to sing our sea shanty. With our hometown behind us in this way, how could we let a poke by a fish stop us finishing!

As we got into the final part of the race itself, we were able to recover our boat speed and whilst we had lost a couple of places to other crews, we were holding our own again and in fact spent the last two days of the race neck and neck with another crew where we were less than 200 metres apart from one another. This itself is amazing to think about as we had cover over 2,800 miles each and here, we were, able to see each other racing as if we had just started a race on the river.

Our approach into Antigua was to be in the dark. We believe this was a great time of day to be entering the finish as it gives the most dramatic photos (I think we might be excused a little vanity at this point!) but it has its challenges. Coming in from the Northeast as we were, we had to come to the island on a route which put us very close to some big vertical cliffs and lots of breaking waves against rocks. We had not seen any land for over 40 days so to be this close to a coastline, with breaking waves and rocks was very unnerving. However, Atlantic Campaigns give you lots of advice and talk you through your approach (although they do not guide you in as you have to finish the race completely under your own navigation) and when we finally turned the corner to see English Harbour the relief and pure joy at hearing our family shouting encouragement was just unbelievable.

I do not think any of us will experience something like that again. You can see some of the video footage from our Facebook page and the scenes of us coming in and seeing family and friends again will be something I will never forget.

Stepping onto dry land again was weird. Our legs were just not working how they should have and it was the land itself which felt like it was moving with the boat being the steady platform. This feeling for me took around 8 days to completely stop happening, I am sure people at the hotel were thinking I had too much to drink when I could not walk in a straight line for the first few days !.

We were all able to enjoy some time in Antigua before returning home and back to our beloved Shropshire homes.

Since then, life has returned to normal for most of us (one of our crew has been very ill and is still recovering from this – nothing associated with the Atlantic row) and the row itself is starting to feel like a ‘did we really do that’ moment in our lives. However, we did do it and companies like ETS helped us raise over £122,000 for our two charities, the RNIB and Severn Hospice. The money has been handed over to them now but we do hope to have a photo opportunity to share with you soon where we do this publicly.

Thank you to all of our supporters, followers, family, and friends. We could not have had the adventure we had without you being behind us and we will never forget this now that we can all say that we have ‘Rowed the Atlantic Ocean’